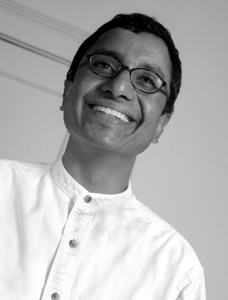 Who will help us see the

Doodling has many mathematical aspects: patterns, shapes, numbers, and more. Not surprisingly, there is often some sophisticated and fun mathematics buried inside common doodles. We'll begin by doodling, and see where it takes us.


Ravi Vakil is from Toronto, Canada. He received his undergraduate degree at the University of Toronto, where he was a four-time Putnam Competition winner. After completing a PhD at Harvard, he taught at Princeton and MIT before moving to Stanford in 2001. His field of research is algebraic geometry, with connections to nearby fields, including combinatorics, topology, number theory, and physics. He has long been interested in teaching mathematics through problem solving; he coached the Canadian team to the International Mathematical Olympiad from1989 to 1996, and has written two books related to problem-solving (one on the Putnam competition, and one titled "A Mathematical Mosaic:Patterns and Problem Solving").

How to get to Santa Clara University:
Click here for a campus map.